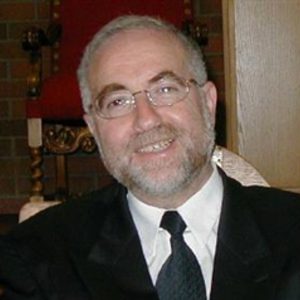 Rabbi Simon Benzaquen was born in Mellila in Spanish Morocco in North Africa.

At age 14, he began 10 years of study at Yeshivat Netzah Israel in Sunderland, England. For the next three years, he studied at Etz Hayim Yeshiva in London, after which he accepted the position of assistant minister to the Southend and Westcliff Hebrew Congregations in Essex, England where Rabbi Benzaquen served for ten years.

During the first two of his years in his position in Essex, he also attended the Jewish College University with an emphasis on cantorial liturgy for Hazzanut. Rabbi Benzaquen earned his BA in Jewish studies at Jews’ College in London and graduated with Honors issued by the National Council for Academic Awards of England. At the same time he also studied for his rabbinical diploma, which he received from the Rabbinical Academy of Marseilles, France.

While living in London Rabbi Benzaquen met and married his wife, Cecilia Margulies. Their first three children, Jonathan, Tanya and Anna Aliza, were born there. Later, the family moved to Maracaibo, Venezuela, where Rabbi Benzaquen held the position of rabbi and spiritual leader of the combined Sephardic and Ashkenazi community for five years.

Rabbi Benzaquen and his family remained in Venezuela until he received a call from Sephardic Bikur Holim Congregation in Seattle, Washington asking him to serve as their rabbi in 1984. He took the position upon the retirement of Rabbi Solomon Maimon.

In 1987 he served as co-chair of the Board of Rabbis for the American Sephardi Federation with Rabbi Marc Angel of New York City. Rabbi Benzaquen was appointed Vice President of the Rabbinical Council of America in 1992 and in 1993. Rabbi Benzaquen is also a member of the Executive Council of Sephardic Rabbis of the USA and Canada.

Rabbi Benzaquen is a Mohel, a Sofer for Sifrai Torah, Tefilin and Mezuzahs and is a noted artist for his unique style of calligraphy of painted and decorated Ketuboth (marriage contracts).

In 1987 he served as co-chair of the board of Rabbis for the American Sephardi Federation with Rabbi Marc Angel of New York City. Rabbi Benzaquen was appointed Vice President of the Rabbinical Council of America in 1992 and in 1993.

Rabbi Benzaquen was one of four rabbis from Seattle who, in 1985, introduced legislation stating that food items, which are labeled “kosher,” must meet the requirements of Jewish dietary law. The law forbids sale of any product, which is falsely identified as “kosher” as a violation of the Consumer Protection Act.

Rabbi Benzaquen has added to his religious skills to benefit the members of his synagogue and the greater Seattle community, such as his receiving certification as a mohel in Israel in 1987 in order to practice ritual circumcision.

In late 2003 Rabbi Benzaquen took a year’s sabbatical to study in the dayanut training program at the Shehebar Sephardic Center in Israel. He became certified by the Jerusalem rabbinate as a dayan (judge) for arranging gittin (divorces).

Rabbi Benzaquen is a member of the Executive Council of Sephardic Rabbis of the USA and Canada.